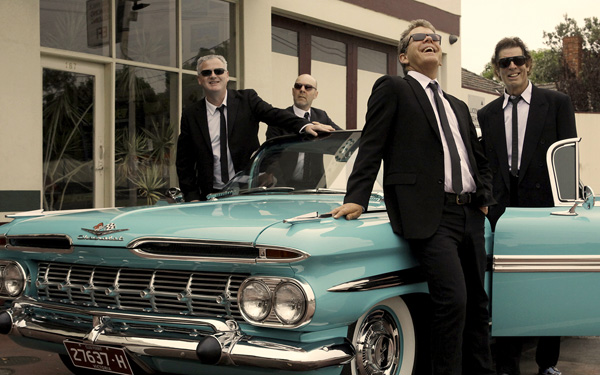 JACKSON COMBO BLUES have been impressing audiences across Australia and internationally since 2013, from Melbourne to San Francisco and London to Devonport with their swingin' cool Blues and infectious New Orleans beats.
Their 'Goin' Down To New Orleans' performances, see them travel the musical road south from Memphis to New Orleans as they pick up the songs of BB King, Joe Williams, The Meters, The Neville Brothers, Sonny Landreth, Professor Longhair, Delbert McClinton, The Wild Magnolias and many many more.
2017 saw them as the 'surprise hit' at the Devonport Jazz Festival in Tasmania. They launched their second release, 'Kool Kats - The Jackson Four', with three sell out full house shows, and a special live to air concert on ABC Radio Drive during the festival.
The band were very excited to be invited to launch, 'Kool Kats', in the UK on Radio K107FM, Scotland. With the program being broadcast across the US on Pure Jazz Digital during the international Edinburgh festival and fringe 2017, they also received news that 'Kool Kats' was top 5 on the Australian Blues and Roots Radio Chart.
The band has developed quite a following overseas – in the Southern US, Europe and especially in the UK. Locally, they've appeared at festivals including the Wangaratta International Jazz, Marysville Jazz and Blues, Bendigo Blues and Roots, Devonport Jazz,  Mordi Fest/By the Bay - Wine and Blues (Kingston), Eltham Jazz and Blues, Stonnington Jazz, Castlemaine Jazz, Mornington Winter Jazz and Frankston Waterfront to name just a few.
Jackson Combo Blues Are:
Peter Jackson – Vocals & Congas
Gary Jones – Hammond Organ
Jeff Mead – Sax & Vocals
Nick Mierisch – Drums
“I had a feeling I was going to enjoy the Jackson Four, and boy did I! They sound like a bunch of real hip London Soho Jazzer/bluesmen. I'm nominating them for UK Blues CD of the month by the way.” Down Home with the Howling Dick Show - Hastings Radio UK