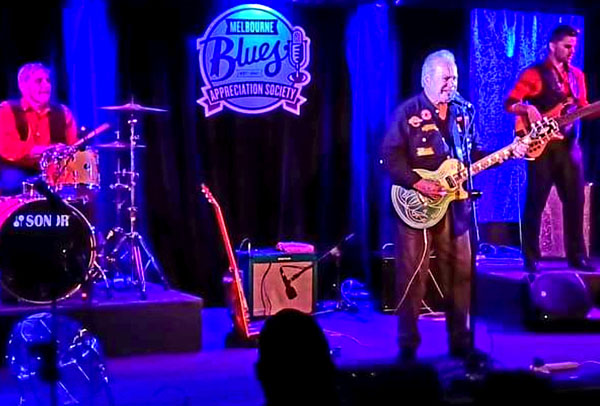 This FREE event will be live streamed on the MBAS facebook page – tune in here on Tuesday 22nd June at 8:00pm:  www.facebook.com/MBAS.AU

NOTE: The feature act are performing for live stream viewing only.

A 'Tip Jar' has been setup to support the MBAS and feature act – all contributions much appreciated, thank you: www.paypal.com/paypalme/mbastips

The MBAS 'House of Blues' remains closed to the public while limited attendance at the club due to Covid restrictions still prohibit viable audience numbers.

JOHN WILLIAMS DOUBLE SHOT OF BLUES with a 2015 Vic/Tas Blues Award for Best Debut Album, and being inducted into the New Zealand Music Hall of Fame in 2020, John Williams (guitar/slide guitar/vocals) has joined forces with Robert B. Dillon on drums, and Connor O'Neill on bass (previously from Dreamboogie) to form a powerhouse new blues trio.
John Williams is an innovative master in electric blues, featuring jaw-dropping guitar licks, and scorching slide guitar. A long and illustrious career has seen him tour with The Yardbirds, Tom Jones, The Animals, Eric Burdon, Roy Orbison, The Easybeats and Jimmy Page, plus countless Australian artists. John was taught his signature licks by Page, and even filled in for him on tour when Page took ill.
With a wealth of experience as a multi-award winning musician and recording engineer, both in Australia and internationally, Robert B. Dillon ensures a steady hand in the drumming department. A respected stalwart of the music industry, Robert has performed with some of Australia's leading artists, both on record and live.
Music has taken Connor O'Neill to South Africa, Dubai, USA and all over Australia performing and recording. Most notably in Memphis TN, twice representing the MBAS at the International Blues Challenge, Conner discovered the Memphis Jug Band which undoubtedly influenced and shaped his 'jug bass' sound – round wounds, no frets and blues is life – everyone knows him as 'The Fretless Guy'.
Working together as a tight, cohesive unit, this combo bring fresh ideas, style and energy to every performance. Playing honest reworked classics and stunning originals, this trio make it exciting to see and hear live blues at its best – "Keeping it Live and Keeping it Blues"