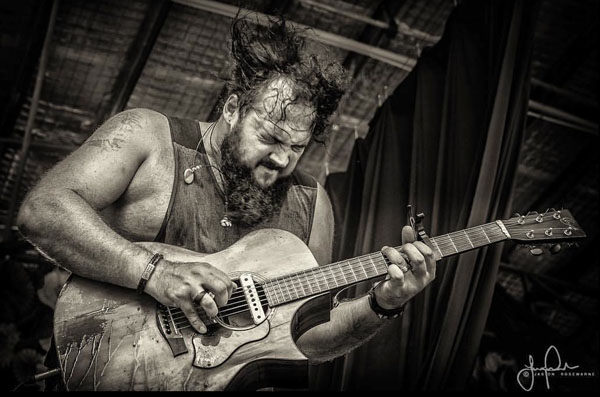 MIKE ELRINGTON performs at MBAS – direct from his successful 3-week European tour-de-force! Mike is a gifted singer songwriter with incredible guitar skills. Standing at almost two metres tall, delivering his signature, gut-wrenching vocals like an instrument all on its own, very few people forget a performance from this man. The commitment to his live shows and the well-earned reputation for leaving nothing behind but sweat has seen him invited to perform at some of Australia's finest festivals, including the iconic Byron Bay BluesFest, Bendigo, Sydney Blues and Roots Festivals and Blues on Broadbeach to name but a few.
Mike has proven himself as one the hardest-working artists currently on the Australian scene, and over the last 20 years since the inception of his career as an 18-year old in Adelaide, has released 9 albums and toured throughout Australia, the United States, Canada, United Kingdom, Europe and New Zealand. Self-managed independent tours to the US have seen him grace stages of some of the most prestigious blues clubs in America, including Biscuits & Blues in San Francisco, JJs Blues in San Jose, The Cat Club on Hollywood's Sunset Strip Los Angeles, The Sand Dollar Blues Lounge in Las Vegas and Sullivan Hall in New York City. After a jam-packed decade of extensive touring throughout not only Australia, but also New Zealand, Nashville and China for the Concrete & Grass festival in Shanghai and opening for US rock legends The Doobie Brothers in front of a sold-out Tivoli Theatre in Brisbane. Mike also took out the prestigious Singer/Songwriter of The Year crown at the Australian Independent Music Awards in Sydney, and had the honour of getting a No.1 spot on the Australian National Blues/Roots Radio charts with his groundbreaking, genre-bending new album Aftershock in 2020.

IMPORTANT: The MBAS are following Govt. mandated Covid venue procedures for your safety. Masks are not mandatory. In the interests of public health and mindfully protecting the vulnerable in our blues community, please cancel your booking if you're feeling unwell on the day, or still recovering from Covid infection.

Attendees are encouraged to pre-book for table seating. Please 'BOOK' a single or multiple (Group) ticket below. To assist our kitchen's catering, when booking, please note if you plan to order a meal on the night.

WHILE GUARANTEED TABLE SEATING ALLOCATION FOR THIS EVENT IS CAPPED, ONCE TABLE BOOKINGS ARE EXHAUSTED/CLOSED, WE STILL WELCOME WALKUPS FOR GENERAL ADMISSION NON-ALLOCATED SEATING (IF AVAIL) AND LIMITED STANDING ROOM.