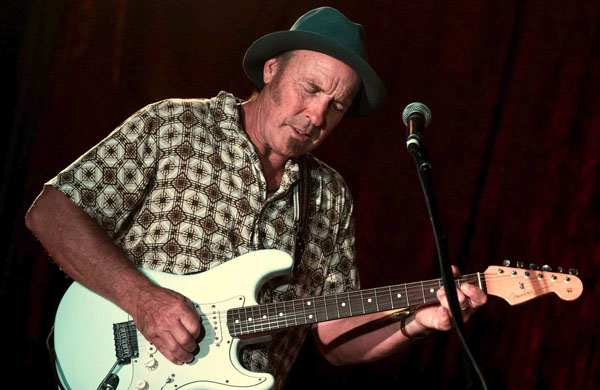 TIM STOUT has a long history in the music industry, and played his first blues gig at 18 drumming with King B, which brought together Swinging Sidewalks founding members John Betros, Peter Cam and Justin Brady on harp. Then Tim's vocals came in to play with Neon Leon and the Speed Kings. Tim left the drums for a time singing upfront of Grand Wazoo then playing guitar and singing for King Cactus. With a listening history deeply rooted in the blues and soul of black American music a journey back into the blues was inevitable and he eventually found his way to The Hoodoo Men, where he and Gav Leadbetter cemented a new band lineup and released "Found the Blues" – an album of original blues all songs written by Tim which spent 9 months on the ABARAC charts.

While The Hoodoo Men continues as a band, Tim also enjoys a solid cohort of fans as a solo act. Not taking the pandemic of 2020 lying down, and at a time when festival and other gig bookings dried up during lockdown, Tim embarked on the epic journey of "6@6"; creating an online family of followers, playing 6 songs live every night at 6pm on Facebook, for more than 220 nights through 2020.